With slightly less than 3 square miles of land with in its boundaries, Pleasant Hills is uniquely situated in a growing area of Allegheny County eight miles southeast of Pittsburgh, PA. Surrounded by reminders of a long history in southwestern Pennsylvania, residents share a pride in the vital community we are today and eagerly plan for the future. We have been deliberate in our efforts to preserve our heritage. Within our borders, we have a privately owned, log home dating back to 1774 which is listed on the state’s registry of historic buildings. Remains of the outdoor summer kitchen and an apple orchard are still clearly present. Little is known about the owner and builder of the three story log and red brick home. It is believed he was a German immigrant. This helps explain the three story construction of the log section. Despite plenty of room to build his home, large, heavy, hand hewn logs were raised higher and higher into place in the traditional building custom of his homeland. In 1840 the "new addition" was built. The red brick exterior was made on-site using the abundant clay found on the property.

Another beautiful stone house known as the "Torrence House" which dates back to 1797 is still privately owned and occupied on modern day Colson Drive. Additionally, Pleasant Hills Borough is one of the few communities in the United States with its own preserve of virgin woodland. Named in honor of the donor, The A. W. Robertson Arboretum, is a 16 acre tract of land containing trees that have been growing here since the Delaware, Shawnee and Mingo Indians were the only people to call the area home. The state certified several trees within this preserve as being over 200 years old at the time of the America’s bicentennial in 1976.

So, just what is the history these beautiful trees have been a silent witness to? 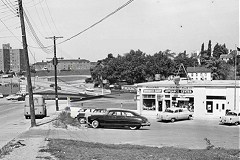 Originally part of the vast Province of Virginia, what is now our Pleasant Hills was in turn a part of Yohogania County, Westmoreland County, Washington County and finally, in 1788, it became a part of the newly established Allegheny County. The first land owner of record was John Reed, Jr. He named the area Reedsburg and built a log cabin on what is now Orchard Drive. A brother-in-law of his, William Walker, soon followed John and settled on a farm nearby which he named "Pleasant Hill Farm". The stone farm house he built later became a tavern and a stage coach stop. It was located near the Route 51/Lebanon Church Rd Cloverleaf. Today, this home, as well as many other historic local scenes, can be seen in the pictorial history of Pleasant Hills at the Pleasant Hills Public Library.

During the last quarter of the 18th century, Reed and Walker were joined by other settlers who were mainly farmers of rye and corn crops. Most of the grain grown on these farms was converted to whiskey as that was the easiest and most profitable product to transport over the mountains to the eastern markets. In the early 1790’s, the new US Government placed a high excise tax on whiskey. Many of the areas farmers felt unfairly persecuted by their new government. Tempers ran hot as many farmers refused to pay their levies and destroyed the stills of farmers who did.

The Whiskey Rebellion, as it was called, became one of the first challenges to the governing authority of the new American government. Fighting broke out all over the "South Hills" area. Well armed groups of farmers waged their war against the government’s revenue collectors going so far as to set fire to the "revenuer’s" homes and robbing the US Mail. Not surprisingly, troops were soon called in from Philadelphia to put down the insurrection. In the end, some of the rebel leaders were taken to the state capital to be tried for Treason. Ultimately, they were all pardoned. 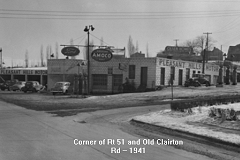 After the Whiskey Rebellion, the area enjoyed over 100 years of peace. During this time, many political subdivisions took place. In 1828, Jefferson Township was carved out of Mifflin and St. Clair Townships. Over the next 18 years, Jefferson would loose parts of its township to Baldwin Township and Snowden Township (known as South Park Township today). These subdivisions and realignments quieted down for another century. During the 1930’s however, the rural nature of the area began to change rapidly.

The first plan of suburban, residential streets and homes actually opened in 1929 along Airport Road - now known as Lebanon Church Road. Despite the Depression, other developments opened new streets for new home construction. "Suburbia" now included new home owners on Betty Rae Drive, Melvin Drive, Old Lebanon Church Road and Pleasant Hills Boulevard. Local resident, Bill Green had a small refreshment stand on the corner of Old Clairton Road and Route 51 - which was not much more than a back country road at the time. The new development brought prosperity to the area and soon Bill Green’s grew into a famous Pittsburgh Night Club.

Finally, in December of 1946, local residents wanting to break away from the still rural majority of Jefferson Township petitioned for incorporation as the Borough of Pleasant Hills. Originally, Pleasant Hills consisted of 837 homes and a total population of 2500. Within 25 years, it had grown to 2630 homes with a population of 10,500. Residents earned livelihoods from: the local steel industry giants of US Steel, (now USX), J&L Steel and Bethlehem Steel; Gulf Oil; Koppers; General Motors; Dravo; Mellon Bank and Pittsburgh National Bank. Many small business owners and professionals in the the legal, medical, insurance and accounting fields enjoyed the small town community life of Pleasant Hills.

Today, Pleasant Hills has 3500 households and approximately 9000 residents. Pleasant Hills is a popular suburb for new home buyers with everything from "first home" to "dream home" to "retirement home" in its housing stock. You have to move quickly to buy one, though, as houses frequently sell within days of listing, ( not uncommonly, even before being listed!). Despite the decline in the local steel industry and many other corporate giants merging away, Pleasant Hills has enjoyed a slow, but steady growth coupled with a low turn over in residential housing. This means neighbors live next door long enough to get to know each other - often attending the baptisms, graduations and weddings of the same neighborhood children. Children who grew up in Pleasant Hills often return, if circumstances permit, to raise their families in the same supportive community atmosphere they enjoyed. Each year, we celebrate our community life with Pleasant Hills Community Day in August. The day kicks off with a hometown parade followed by great food, family fun and games, entertainment and a great fireworks grand finale! It is so much fun that those 200 year old trees in our Arboretum blush in beatuiful colors every Autumn; we are Southwestern Pennsylvania at its very best!

Click HERE to signup for important Boro messages and alerts!